Orienteering on the Woolwich Ferry 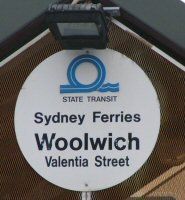 For those people who are familiar with Woolwich in London, the prospect of orienteering there might not be that attractive. But this Woolwich ferry set sail from Circular Quay, sailed out past Sydney Opera House, under Sydney Harbour Bridge and twenty minutes later, after a brief stop at Greenwich, arrived at Woolwich Pier. Runners could be seen from the ferry as they navigated through the parkland along the harbour edge, some coming right past the ferry terminal to a control in the small park there.

This was the second event in the Sydney Summer Series. Each event is a 45 minute score event with 30 controls and a maximum score of 600 points. The events are held on Wednesday evenings from October through to March. Maps are invariably A4 size at 1;10,000 with 4 or 5 metre contours, taking in the local streets and parks. Attendance can be anything up to 200 or more. At the front end people are running very fast, whilst at the back end it is a sociable night out on a warm summer’s evening (or not when the rain starts).

A typical map extract is shown on the left. The flat I was staying in is next to control 30. The road up from Balmoral Beach (running west from control 9) is 400 metres long with 60 metres climb: I have managed to run up it, but only just. The uncrossable fence in the sea north west of 24 is a feature you don’t see very often: it’s the shark net protecting the children’s bathing area.

Organisation is functional and minimalist. You fill in a control card, pay your $7 (about £3) and get given a pre-marked map. Start times are allocated at the start. Controls are plastic yoghurt cartons painted red and white, with a number and two letters on. There is no punch; you have to write the letters in the relevant box on the control card. At my first event I confidently set off to the first control, only to have to return to the start straight away to collect a pencil. The scenery can be spectacular as you run through the streets of the harbour suburbs and into small pockets of native bush complete with rock features, eucalyptus and kookaburras. Events also tend to be quite hilly as you plunge down dead-end roads and tracks to the beach and then back up again.

Start times are normally from 4.45 p.m. to 6.45 p.m. except for the first three events of the year. These take place before the clocks go back (spring back fall forward when you’re down under). Those of us who were also trying to hold down a full-time job tended to arrive quite late and having to cope with darkness (every week) and thunderstorms (every week as far as I can tell). This Woolwich event was the second time where I was unable to read the map by the end since it was so dark and raining so heavily. Events are planned so that the top runners can just about get round all the controls, probably running 10km or more in the process. I often found myself desperately trying to get back to the finish without too many penalties having got stuck in a thick patch of undergrowth, or simply misjudged the distance and climb on my chosen route. The Woolwich event was no different: a missed path in green near the end combined with the thunderstorm made me a minute over time. 390 points left me equal third in a field of 26 in the senior men’s category (M40+).  The winner with 470 was Mike Burton, a familiar name to some old hands since he grew up in Mole Valley and his brother Tony is a top M40 over here. Oh what a small world.

Top 10 - Things You Didn't Know You Had Missed

The mistakes are all waiting to be made

Top 10 - Things You Didn't Know You Had Missed

The mistakes are all waiting to be made