(This article was written by Ian Gilliver and is reproduced from Issue 56 of Lokation, the London Orienteering Klubb newsletter.) 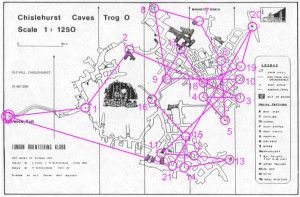 One hundred and one competitors accepted this unique navigational challenge and some twenty more pursued the less taxing wayfarers course.

The intrepid navigators completed a testing course some 2.5km in length and comprising 22 controls. Winner by a clear minute was Jim Malison in little over 25 minutes; not bad for a course with seven sets of master maps. The slowest competitor took more than four times that long.

The caves were formed by human excavation of a chalky hillside. The terrain was essentially flat, cool and gloomy. There were some similarities to a street event, except the streets had no names. Imagine dark grey-walled terraces of parallel or near parallel streets, crossed nearly at right angles with more of the same to form small blocks of buildings, each looking the same as the next. The surface of the streets is uneven, possessing a cobbled quality. Occasionally you would clamber over a pile of earth, obstructing progress down the street, and occasionally you would see a disused toilet block. These latter date from the Second World War when the caves were used as an underground shelter. One competitor showed Hazel Blackstone the bay where as an evacuee he had slept more than 40 years earlier.

While competing, concentration was vital in the unlit tunnels. So long as you maintained contact with the map navigation was straightforward. Once you miscounted side streets you were lost and relocation was difficult. You can't follow a safety bearing in a street event.

Few of the passages were narrow, and fears that the event would have to be cut short when my now ample frame became stuck in a tunnel were ill-founded. Nevertheless I did graze my back on a low ceiling at one point. Opportunities to run hard were few and as the planner and originator of the event, Cedric Finch, said, anyone who completed the navigator's course in less than 30 minutes must have dug their own tunnels.

Notable LOK performances were recorded by the twin head-lamped Simon Errington who placed seventh; by Mike Hampton who, because he was enjoying himself so much, savoured the course in 58 minutes; and by our chairman who had a bit of bother with control 10. Hilary and Gail cruised the wayfarers course to finish second, while in sixth place was ex-LOK member Roman Bednarz, a name to conjure with.

Thanks to Cedric Finch (originator/mapper/planner), Mark Blackstone (mapper/controller) and Bryan Hildrew (organiser – good quick results!). My lasting memory will be the tropical sensation, reminiscent of stepping out of a plane in Bali (!), of meeting humid warm air as I left the 50 degree (F) coolth of the caves. Finally, I have to confess, I was one of the select group of orienteers to compete in bramble bashers. Puzzling but true.

Why Sprint Races are Different

Why Sprint Races are Different